A study published in Oceanography lays out how changing ocean conditions in the northwestern Atlantic Ocean are further complicating efforts to protect the endangered North Atlantic right whale from fishing gear entanglements and ship strikes.

North Atlantic right whales are now at a crisis point with fewer than 400 individuals and less than 100 breeding females remaining. The study points to climate-driven oceanographic changes that have resulted in less favorable foraging grounds, driving altered feeding behaviors and exposing the species to increasing deaths from fishing gear entanglements and ship strikes.

“The Gulf of Maine and western Scotian Shelf, which include areas where we typically see right whales feeding in the spring and summer, began warming at an alarming rate in 2010,” said Dr. Erin Meyer-Gutbrod, one of the lead authors on the study and an assistant professor at the University of South Carolina. “Our goal was to understand the consequences of that warming for the whales. We found it had profound impacts on the food web, including a drop in the whales’ main food source. As a result, they began searching for food further north in the Gulf of St. Lawrence where, at the time, they lacked protections from gear entanglements and ship strikes.”

Oceanographic and food web conditions in the northwestern Atlantic have long been driven by natural variability linked to the Arctic Oscillation. These often-decadal shifts made it possible for managers and scientists to better understand where North Atlantic right whales were likely to find areas with a high abundance of food.

“In 2010, an unprecedented regime shift occurred in the Gulf of Maine and western Scotian Shelf,” said Dr. Charles Greene, another of the study’s lead authors from Cornell University, “one in which human-driven climate change appears to be playing an important role.”

The cause did not arise simply from warming of the sea surface; rather, it was driven primarily by a northerly shift in the Gulf Stream’s north wall, which resulted in warmer slope water being injected into the Gulf of Maine and western Scotian Shelf’s deep basins through deep-water channels.

“In other words,” Dr. Greene added, “the Gulf of Maine and western Scotian Shelf region was warming from the bottom up as well as from the top down.”

Coinciding with these abrupt changes, Calanus finmarchicus, a tiny planktonic organism that is a key component of the food web and primary source of nutrition for right whales, declined in the region. As a result, right whales began moving beyond their traditional feeding grounds. By 2015, a number of whales were observed foraging further north in the Gulf of Saint Lawrence where they lacked any protections.

In the summer of 2017, 17 right whales died – 12 in Canadian waters and 5 in U.S. waters due to fishing gear entanglements and ship strikes. The confluence of pressures – especially from changing food conditions but also lethal and sublethal gear entanglements – also resulted in a decline in right whale calving rates. Combined with elevated mortality, the population experienced a roughly 7% loss between 2017 and 2020.

In response, NOAA declared an Unusual Mortality Event for North Atlantic right whales. This authorized federal authorities to investigate the event to minimize deaths, determine the cause, and seek additional information. Canada also instituted emergency measures to prevent further harm, including extensive monitoring which triggered actions such as mandatory slow speed zones for vessels and snow crab fishery closures if whales were detected.

Each year since, the Canadian government has implemented enhanced management measures to protect right whales. Measures include dynamic management that is supported by increased monitoring, seasonal shipping and fishing management areas, and vessel speed restrictions, each focused primarily in the Gulf of St. Lawrence.

In late 2020, NOAA Fisheries proposed new regulations as part of its right whale recovery plan with the goal of further reducing entanglements in fishing gear, specifically in the Northeast Jonah crab and lobster trap/pot fisheries. There have been two documented mortalities to date in 2021, according to NOAA Fisheries, and deliberations about the future of right whale protections in the U.S. are ongoing.

“As warming becomes more frequent and persistent, right whales will continue to surprise us – showing up in new and old places alike,” said Dr. Kimberley Davies, another of the study’s authors from the University of New Brunswick. “Managers, scientists, and stakeholders on both sides of the border must work together to more nimbly implement strong measures that keep pace with the rate of ecosystem change.”

The scientific community can help by enhancing existing monitoring of ocean conditions and whale sightings. “Our goal in supporting this research is to help managers and stakeholders grasp the complex changes happening now so they can make informed decisions about protecting these critically endangered marine mammals,” said Charlotte Hudson, project director of the Lenfest Ocean Program.

Such information could also be used to develop models that help predict where to expect whales as conditions change, potentially giving decision makers an important tool to better target protective measures. 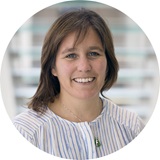 Cross Currents discusses the ongoing and completed results of research projects the Lenfest Ocean Program has supported over the past 15 years. These nearly 100 projects have helped connect science with marine policy and management.