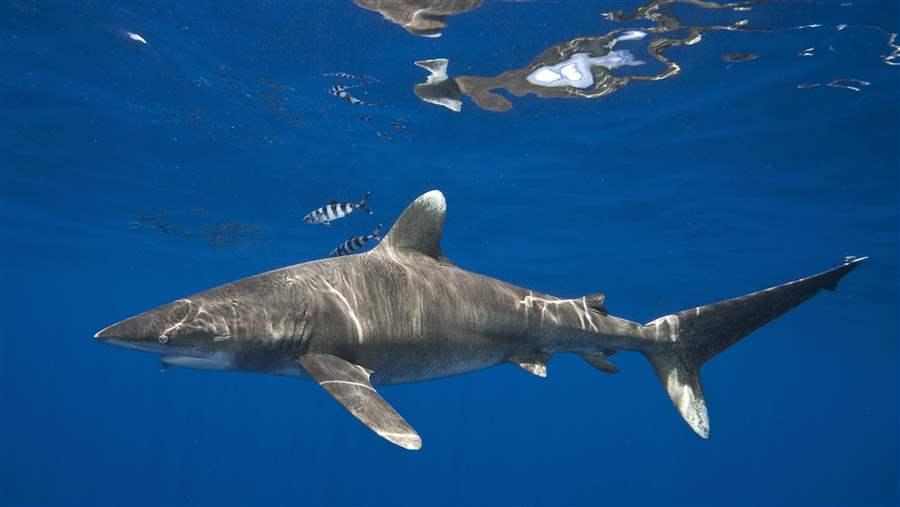 A Lenfest project contributed to protections for oceanic whitetip shark in 2010, a species identified as among the most vulnerable by its risk assessment framework.

In 2015, Charlotte Hudson, director of the Lenfest Ocean Program, attended a scientific workshop at Shanghai Ocean University. The scientists who provide information to China’s vast high-seas fishing fleet work at the university’s fisheries department. There she met a young research scientist whose office walls were lined from floor to ceiling with fishermen’s logbooks, which record each boat’s itinerary and catch data.

Although Hudson was only permitted to flip through one of the logbooks, she quickly identified unexpected evidence of a significant accomplishment by her program. Inside the front cover were several images of sharks. The scientist explained that these images identified species that fishermen were banned from catching. Hudson realized that she was looking at the real-world result of a project she helped create in 2006: to identify which shark species where most at risk from pelagic longline fishing.

Evidence like this that clearly illustrates the impact of research on policy is rare. But the story of this unexpected discovery illustrates some of the practices that can help increase that impact, as well as some of the challenges to doing so.

It starts in the early 2000s with research results suggesting serious challenges with shark management in the Atlantic Ocean. A series of studies by marine ecologists Julia Baum, Boris Worm, and Ransom Myers (e.g. Baum et al. 2003) showed critical declines in great white, hammerhead, and thresher shark populations in the Atlantic Ocean. But these and other publications used data mainly from the catch records of fishing vessels. This approach was met with skepticism by stakeholders and managers, because catch data can reflect changes in fishing practices, not just abundance. And because of the high levels of uncertainty—related to unreported catches and incorrect species identification—stock assessment models applied to sharks resulted in conflicting estimates of the status of various species. Progress in establishing management measures was stalled at the main body overseeing shark fisheries in the Atlantic, the International Commission for the Conservation of Atlantic Tunas (ICCAT).

To explore how the Lenfest Ocean Program might help inform the debate, Program staff reached out to U.S. fisheries experts working at ICCAT, scientists with experience in shark stock assessments and biology, and stakeholders who work for the conservation of sharks. From these conversations, they realized a solution might be found in a project they supported previously that conducted risk assessments for data-poor U.S. fisheries. They were also aware that, given the contentious nature of shark management, any research on the subject would need to consider a diversity of stakeholder views and management needs.

The program tackled the challenge by supporting a grant to ecologist Colin Simpfendorfer. He convened a team of experts to adapt the earlier risk assessment methods and apply them to rank the vulnerability of shark populations in the Atlantic. To capture a wide range of views, the team included diverse stakeholders and experts in shark management, including scientists from several ICCAT member nations, a member of ICCAT’s research committee, and experts in shark biology, modeling, and risk analysis.

This group combined several existing approaches to create a risk assessment framework that could take advantage of the little information scientists did have. For example, they looked at the productivity of each species and its geographic overlap with pelagic longline fishing gear in the Atlantic Ocean, which represents a major fishing risk to these sharks. They also classified poorly understood shark species with biologically similar but better understood species.

The resulting framework produced a ranking of shark species in the Atlantic based on the risk posed by overfishing, integrating the latest science, conservation concerns, and management needs. Because the experts did not collect new data, they were able to produce a report relatively quickly; in 2008, their data helped to inform a new round of deliberations at ICCAT.

Lenfest Ocean Program staff invested significant time and resources in disseminating the results. They invited Simpfendorfer to Madrid to present his results to ICCAT’s research committee. He then traveled to several European member nations to meet with decision-makers likely to lead on shark measures at ICCAT. Throughout this process, Program staff worked with Simpfendorfer to ensure that each of his presentations and all materials were tailored for each audience.

According to observers and ICCAT documents, this project’s results contributed to the Commission’s first shark protections, for bigeye thresher shark in 2009 and oceanic whitetip shark in 2010. Both species were identified as among the most vulnerable by the risk assessment framework. (Further details are available in Bednarek et al. 2011.) Of course, many decision-makers, fishermen, scientists, and advocates had been working on shark conservation for years before the study. But indications are that this particular research project helped get these critical conservation measures to the finish line. And, years later, they appeared in China, printed in fishermen’s logbooks. As a member of ICCAT, China is bound to implement these protections.

Much work remains, both in shark science and in sorting out the impact of research projects intended to inform policy. Being able to trace the effects of research results to real world change is unusual. The Program has found it’s rarely enough to simply publish scientific results; it needs to regularly engage decision-makers and use its expertise to build connections between research and practice.

The Lenfest Ocean Program is part of a community of practitioners working to build a greater understanding of how to effectively connect science and policy. The proceedings of a recent meeting of this group are available here, and interested readers are welcome to contact program staff for further information. The program has also published experiences from other efforts at the science-policy boundary (Bednarek et al. 2015). 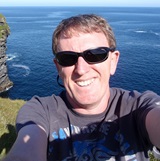