GRANT AWARDED: February 2014. Bycatch, the unintentional capture of non-target marine species, creates many ecological and management issues for fisheries. Current methods to address bycatch typically involve gear modifications, restrictions, or fishery closures. Although these approaches decrease the amount of bycatch, to date they have not been successful in eliminating it altogether. However, in the Mid-Atlantic region, information from species-specific tracking systems and environmental databases has created an opportunity to develop a tool that will predict the preferred habitats for species susceptible to bycatch and help fishermen avoid the areas.

This project, led by Dr. Matthew Oliver at the University of Delaware and Dr. Dewayne Fox at Delaware State University will link observations of two threatened species that are often taken as bycatch—Atlantic sturgeon and sand tiger sharks—with environmental data, such as water temperature and salinity, in order to predict their movement patterns. The result will be an online tool accessible to fishermen and managers through a website, which would show in real time the location of these species, enabling fishing practices to be adjusted to reduce the chance that they will be incidentally caught. If successful, the project would also serve as a case study for other species and regions for which similar data exist. 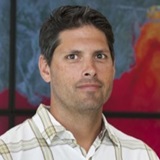